Lech Wałęsa is the legendary leader of the “Solidarity” movement and the author of its victory in 1989 over the communist regime in Poland. His life in inseparably connected with the Polish history and Poland’s way to freedom.

Lech Wałęsa was born on 29th October 1943. First mention about his activity in the anti-communist opposition originates from 1968 when Wałęsa, then a young electrician in the Gdansk shipyard, tried to persuade his colleagues not to take part in the mass meetings organized by the Polish government to condemn student’s strikes during the March 1968 events. Since then he became actively engaged in public affairs, taking part in the work of the Strike Committee in December 1970. He was even offered leadership in the Committee.

After the tragic events and the death of many protesters, shot by the police forces suppressing the strikes in December 1970, Wałęsa, realising that he cannot allow this situation to repeat itself, engaged himself in the activity of the Free Trade Unions. He was responsible for organising workers, distributing oppositional leaflets and, together with other activists, educating labourers on their rights. 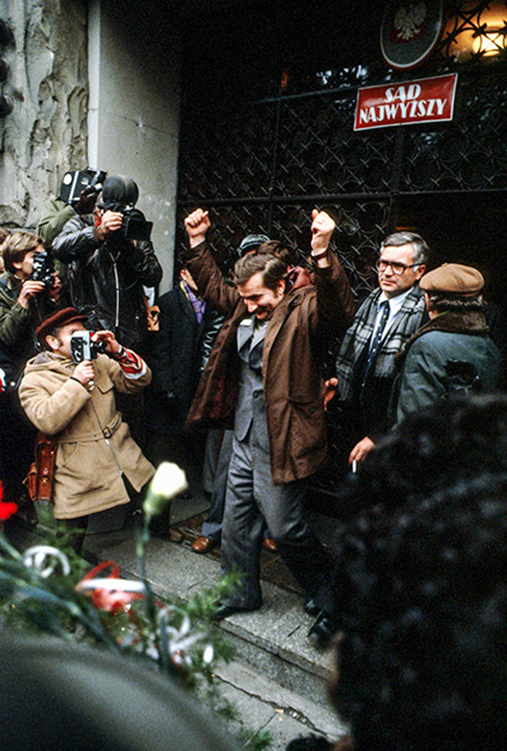 In August 1980 Wałęsa was one of the main organisers of the strike in the Gdansk Shipyard. His brave character resulted in unyielding negotiations and tough struggle for the realisation of the protesters demands. Wałęsa’s activity led to a bloodless victory - the foundation of “Solidarity”, the first independent and oppositional social movement in the Soviet bloc.

The great success of “Solidarity”, with Wałęsa as its leader becoming widely recognised around the world, resulted in a fierce reaction of the communist regime. On 13 December 1981, in attempt to suppress political opposition, martial law was introduced. “Solidarity” was quickly delegalised and Wałęsa, along with other oppositionists, interned.

Martial law caused many to lose hope for freedom but Wałęsa didn’t even think about surrender. His believe in the idea of solidarity was far stronger than the constant repression of the regime. This commitment was recognised by the global community in 1983 when he was awarded with the Nobel Peace Prize. However, Poles were still to wait for freedom. 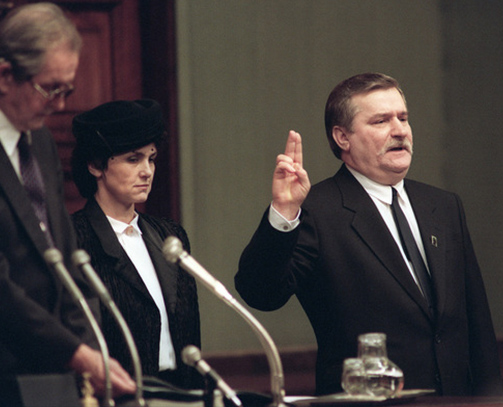 In 1989 Wałęsa was the leader of the oppositional delegation during the Round Table Talks. Although relatively week, Polish regime was still dangerous. Wałęsa’s courage and decisiveness led to the compromise with the communist authorities. The election of 4 July 1989, being a great success of the opposition, resulted in the formation of the first noncommunist cabinet in the Soviet bloc.

On 22 December 1990 Wałęsa was elected the president of free Poland. During his presidency and after it he remained actively engaged in the public life, being the advocate of Poland around the world.

He strongly supported Poland’s accession to NATO and the European Union. In 1995 he founded the Lech Wałęsa Institute. Its aim is to popularize the achievement of Polish “Solidarity”, educate young generations and support democracy and the creation of civil society in Poland and around the world. 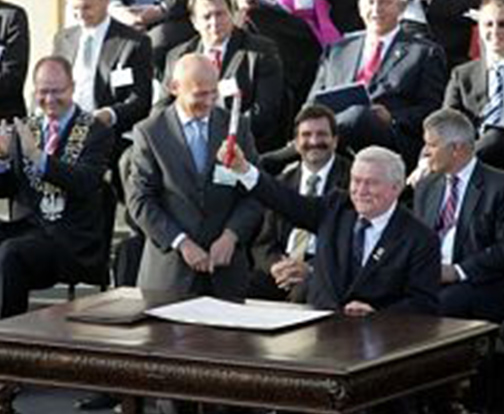 Today Lech Wałęsa continues his mission of promoting the idea of solidarity. Traveling around the world, he speaks about Poland’s bloodless transition towards peace and democracy as a role model for different nations. Through lectures and dialogue he calls for a world based on universal values. Being a supporter of globalisation and seeing the great potential of modern technologies and global development, he promotes ways of peaceful cooperation between the nations in the 21st century.

Lech Wałęsa’s activity has been widely recognised. He was awarded with the Poland’s highest order, The Order of the White Eagle as well as the Order of Polonia Restituta. In 1989 he was given the highest American decoration for foreigners, the Medal of Freedom. He has also honoris causa degree at 38 foreign universities and honorary citizenship of 35 cities around the world. In 2004 Wałęsa represented the ten newly accessed states to the EU during an official ceremonial in Strasbourg. In 2008 he was elected the member of the Council of Sages. The same year he founded the Lech Wałęsa Award which was given, among others, to Ales Bialiacki, Luis Inacio Lula da Silva and Mikhail Khodorkovsky.